Weight gain in dogs is a huge problem today, and the number of obese dogs is on the increase. 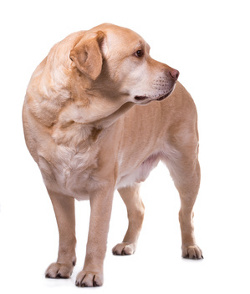 According to a recent study conducted by the Association For Pet Obesity Prevention, 53% of dogs are overweight to some degree.

This is really worrying because weight gain is a double-whammy for your dog because it can be caused by  poor diet or disease….

… and that extra weight can also cause  more health issues to develop.

Sudden weight gain in an older dog is something that you always need to take seriously.

Older dogs have an above-average tendency to gain too much weight, and in seniors this is more likely to be caused by an illness or health problem, than it is in younger dogs.

Even when the cause of the weight gain is benign, being too heavy puts a lot of extra strain on their already tired bodies and that’s why it’s something to keep an eye on.

If your older dog suddenly seems to have gained a lot of weight, there could be caused by a lot of different things. Some of them simple, others more serious.

Here are the most common causes of weight gain in older dogs….

The type of weight gain in dogs that’s caused by poor diet tends to appear slowly over time. When you look at your dog every day it’s easy to miss this gradual change.

But your senior dog’s metabolism isn’t as fast as it used to be, and as his ability to use up the calories he’s eating slows down, the weight gain can speed up.

When I say ‘poor diet’, that doesn’t necessarily mean that you’re feeding your senior a sub-standard, low quality food (although you might be, without realizing it!).

It could just mean that the dog food you’re using isn’t right for his size, activity level, or overall health.

The fact that Fido is probably less active than he was when he was younger, just compounds this problem, as does giving him too many treats, or letting him share your ‘people food’.

So although one day you might suddenly realize that Fido looks a bit chubby, and think it happened overnight, he might actually have been headed in that direction for a while!

Your older dog has very unique dietary needs… because it’s not just his age that you need to take into account.

Just picking out a food that says ‘Senior Formula’ or something similar, isn’t the answer.

My page on senior dog nutrition discusses some of the most common misconceptions that surround feeding older dogs, and will help you figure out exactly what your dog needs in his bowl.

Weight gain in older dogs which is caused by an imbalance in their diet doesn’t have many symptoms, other than gaining (or losing) weight.

And what you do see will be mild, and shouldn’t make him act ‘sick’.

But you could possibly see:

Of course, if Fido seems unwell in any way, don’t assume it’s just his diet… make sure he gets checked out by a veterinarian.

We’ve all heard people explain away their weight gain with the phrase “it’s just my thyroid”.

Sometimes of course it IS their thyroid that’s at fault, and dogs can suffer from the same problem.

When too little hormone is produced (under-active thyroid), the condition is called ‘hypothyroidism’  and the symptoms of this problem include weight gain.

Hypothyroidism is most often seen in middle-aged to older dogs from the medium to large sized breeds. But any dog of any size/age could have it.

If your older dog has an under-active thyroid you might see one, or more, of these other symptoms. But you might not.

The only way to find out if Fido is suffering from hypothyroidism is to have your vet run some blood tests.

Cushing’s Disease is another hormone-related problem which is most likely to affect middle-aged to older dogs.

This time symptoms are caused by too much of a particular hormone, a steroid hormone called cortisol.

Again, this hormone affects Fido’s metabolism (as well as other important bodily functions), and too much of it in your senior dog’s system causes problems.

The most common ones are:

Any one, or a combination of, these symptoms can be a sign of various other diseases or conditions.

Your veterinarian can diagnose Cushing’s Disease by taking a blood sample and having it tested.

Diabetes can affect dogs of all ages, but it’s most likely to appear in middle aged to elderly dogs.

Rapdi weight gain can be a symptom of diabetes in dogs, but so can sudden weight loss!

Other symptoms that you might notice in a dog who has diabetes include:

As you can see by now, most conditions have at least one, if not several, symptoms in common.

So, to get an accurate diagnosis you need to have Fido examined by your veterinarian, who will do a blood test to get to the root of the problem.

Other Causes Of Weight Gain In Older Dogs

Some other conditions that could cause Fido to gain weight include…

Medications which can cause Fido to put on weight, or retain water, include anti-inflammatories, corticosteroids and anti-depressants.

Some dog breeds which are more prone to being overweight as they age include Labrador Retrievers, Basset Hounds, Beagles, Rottweilers, Spaniels, St. Bernards, Bulldogs and Dachshunds.

BUT, pretty much any dog can get too fat given the right (or wrong) circumstances, diet, or health problems!

Problems Which Can Be CAUSED By Weight Gain

Gaining weight can be a sign of illness or that your dog isn’t getting the right nutrition, but it can also BE the cause of problems itself.

Older dogs are often already suffering from creaky joints, major organs which aren’t as young as they used to be, and the loss of muscle tone and strength. 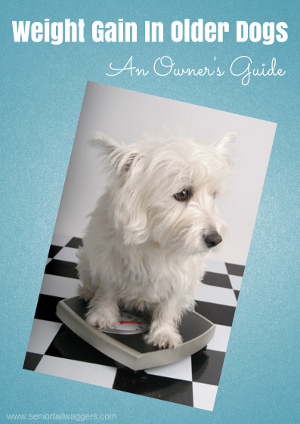 All of this means that their bodies don’t need the extra stress of having to carrying extra pounds around on a daily basis.

Excess weight can cause health problems even for younger, fitter dogs and it’s always best to keep your dog on the ‘lean’ side.

This goes for puppies too, especially with the large and giant breeds.

The type of issues that that can be caused by a dog being too heavy, or even obese, include – joint/ligament problems (including hip dysplasia), heart problems, diabetes, respiratory difficulties, liver insufficiency, skin irritations and more.

Then there are other worries, ‘minor’ ones such as excessive flatulence (probably only considered to be minor if you don’t have to share your bed with a gassy bulldog!), as well as some that are potentially more serious such as heat intolerance, or increased risks related to surgery or anesthesia.

Overall, a heavy dog is NOT a healthy dog, and the toll this takes on your senior dog reduces the quality of life he might otherwise have, and can even reduce the number of years you get to spend with him.

What To Do If Your Senior Dog Is Overweight

Before you do anything else, you really need to have your golden oldie examined by your veterinarian.

As you can see from all the above info., there are just too many possible causes of rapid weight gain in dogs for you to be able to figure out which one (or combination) is causing the problem.

Plus, many health problems can only be diagnosed with a blood test.

If your older dog has gotten chubbier slowly, and seems perfectly healthy…. ie. is eating normally, drinking normally, defecating normally and acting just fine, then chances are good that his extra pounds are just the result of a slower metabolism, and lower activity levels.

But, if the weight gain is sudden, or Fido shows ANY signs of being unwell, or just ‘not himself’, it’s important to make an appointment for your vet to take a look at him.