Is your older dog not eating as much as he used to?  If so, it’s natural to worry – but not always necessary. 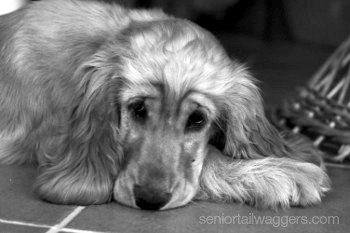 There are lots of reasons why Fido’s appetite isn’t up to par.

Some of them are just the result of the aging process.

Others are caused by health problems (both minor & major).

So, how do you know when your old dog’s ‘appetite malfunction’ is something that needs investigating further?

This page has the answers you’re looking for.

If you know why your older dog isn’t eating properly and he doesn’t need veterinary treatment, click here to find out what you can do to help.

Why Is My Older Dog Not Eating?

First of all, just to clarify… there is a difference between a ‘loss of appetite’ and ‘not eating’.

The Connection Between Appetite & Weight

Your dog’s weight is as important as his appetite.

A dog who isn’t eating as much as he used to, but is maintaining his weight is less worrying than one who is losing weight – either consistently or suddenly (regardless of the state of his appetite).

If Fido seems to be hungry all the time and yet is losing weight, that might mean there’s a different type of health problem such as diabetes.

Thyroid issues can put appetite and weight gain/loss out of whack too.

If your senior dog suddenly refuses to eat at all, then he needs to be seen by your veterinarian right away.

It’s also important to differentiate between an od dog who’s always been ‘picky’ and gradually becomes ‘pickier’ and one who’s previously always loved his food but now has very little appetite or couldn’t care less.

The second scenario is much more worrying than the first and needs to be taken seriously.

Appetite is one of those things which can fluctuate on a fairly regular basis.

Dogs eat less when they’re in pain, stressed or anxious, when it’s hot, when they’re not getting much exercise and so on.

But if your senior dog isn’t eating on a regular basis, or he’s lost his interest in food, then you need to figure out what’s going on.

Here are some of the possible reasons for an older dog not eating:

Yes, sometimes just being a senior citizen is enough to take the edge off your dog’s appetite.

He probably doesn’t get nearly as much exercise as he used to because his body isn’t up to running, jumping, leaping, chasing….. a leisurely stroll down the street and back may seem like a marathon to him.

Plus he’s sleeping more than he used to, and how many calories can a body burn when it’s inactive? Generally not a heck of a lot.

If he’s not using up all those calories then he’s not going to be as hungry as he would if he was up-and-at-em all day.

Also, as dogs age (humans too!), their metabolism naturally slows down.

This means that it’s more difficult for him to use his food efficiently, or quickly. 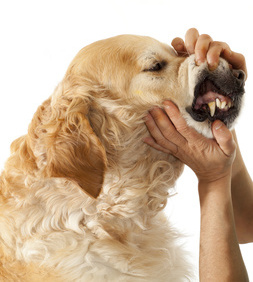 When you’re older dog isn’t eating well, you may not think to look inside his mouth right off the bat.

But dental problems – such as broken teeth, gingivitis, cavities and/or infections – can make eating very painful.

Generally this is a pretty straightforward fix, requiring just a trip to the veterinarian for extraction or antibiotics. But the result can be nothing short of amazing – for Fido.

So it’s a good idea to check out your senior dog’s teeth to rule this out.

There are a lot of different senior dog health issues that can cause your older dog to eat less.

Some of them are fairly minor, others can be serious or chronic.

The less serious possibilities include a digestive system that’s just not as efficient as it used to be, food sensitivities, constipation, a poor sense of taste/smell which makes his food less appealing, depression or cognitive dysfunction, dental problems (see above).

If you’ve got an older dog who’s not eating, some more serious possibilities include:

There are often other symptoms as well as the appetite problem when your dog has a more serious illness.

Overall, if Fido isn’t eating the way he used to and is showing ANY other signs of not feeling well, your best bet is to get him a full veterinary exam.

If he stops eating suddenly, then it’s an emergency situation and he needs to be seen asap.

What To Do When Your Older Dog Won’t Eat

There are some situations where you need to get your senior dog a vet appointment as a priority, these include when:

If your older dog isn’t showing any of these symptoms and he’s acting normally but just seems to be less interested in his food than he used to be, there are some things you can do to encourage him to eat more.

Find practical, tried-and-test tips and advice that will help here…. Getting Older Dogs To Eat.