Is your older dog is coughing?

Is it the sort of cough that lingers or is chronic?

If so, it could be a sign that there’s something serious going on ‘behind-the-scenes’. 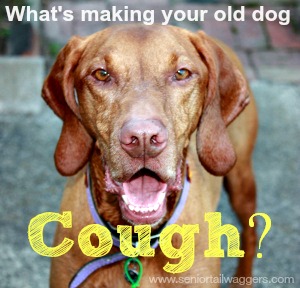 Of course there are all sorts of reasons why a dog might cough, many of them pretty simple.

But in older dogs it can be more serious, and the cause can often be narrowed down to one of three options.

What Causes Coughing In Older Dogs?

Of of the three health conditions that are most likely to be at the root of your old dog’s coughing, heart problems are at the top of the list.

Dogs don’t have heart attacks the way we humans do, and the signs of canine heart problems are quite varied, and sometimes very subtle.

A persistent cough is just one of them, but it’s a good indicator that something isn’t right with your dog’s heart.

Coughing, especially after exercise, when lying down, or on waking up, is a common symptoms of Congestive Heart Failure in dogs.

Heart failure in older dogs is most often the end result of Mitral Valve Disease (although there are other causes of heart failure in dogs of all ages, including congenital problems, tumors, virus or bacterial infection, parasites and so on).

Because the weakened heart valves don’t pump blood through the heart efficiently, some of it leaks out into the lungs, taking up spaces which should be filled with air.

Damage from a heartworm infestation can cause your dog many of the same symptoms.

If your older dog s coughing as well as showing other signs of heart problems (and he isn’t taking a monthly heart preventative) then your vet will want to rule out heartworm as the cause of the problem.

Over time, the extra workload that this type of leak puts on the heart muscles, causes your dog’s heart to become enlarged as the muscle walls thicken.

This can put pressure on the trachea.

It’s the combination of these two things that produce the characteristic, and chronic, cough that senior dogs with heart disease develop.

Or it could be ‘wet’…. this means it sounds as though there is mucus or fluid in his chest, he may gag a little too.

A lot depends on the what stage the heart problems have reached, and what’s going on inside your older dog’s chest.

Although there’s no ‘cure’ for heart failure, it can often be ‘managed’ with medication which reduce symptoms and improve your dog’s quality of life.

Heart medications may help the underlying problem, but they often don’t do much to alleviate a cough.

This is an all-natural cough suppressant formulated specifically for dogs who have a heart-related cough and are on heart medication.

It’s for the cough only, not the underlying heart condition, but it can make your senior dog feel much more comfortable, sleep better and reduces gagging and wheezing too.

A tumor due to lung cancer is the second most common cause of an older dog coughing.

Dogs don’t smoke, but if their owners do then they’re at as much risk of second-hand smoke as the rest of us are!

If you live a big city, where there’s a lot of traffic or pollution, this can also cause lung problems for your dog, including lung cancer.

Tumors in your dog’s lung/s could also be secondary tumors… which means that they’ve been ‘seeded’ from the original tumor which could be in another part of his body.

In senior dogs, secondary tumors are the most common kind, but primary lung cancer can also happen.

The most obvious sign of a lung tumor is a persistent cough. Often it’s a ‘wet’ cough, which sounds as though there is fluid/mucus in his lungs.

As well as causing older dog coughing, lung cancer might also make your him show some lameness or limping in his front legs.

This is a result of inflammation and bone changes caused by the lung cancer.

Only a veterinarian can diagnose a tumor, and then find out whether or not it’s cancerous.

Depending on what he finds, your vet may be able to completely remove the tumor, and he may recommend other additional treatments depending on how advanced (or widespread) the cancer is.

In third place is this condition, which happens when something goes wrong with the muscles and nerves that control your senior dog’s laryngeal function. 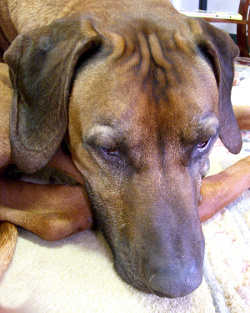 It’s a partial paralysis and Fido can still breathe, but he can’t move as much air as normal through his larynx and into his lungs.

This can make him cough or gag, especially when he’s eating, excited or exercising. He may seem to have trouble breathing, pant a lot, gasp or sound ‘wheezy’.

Symptoms tend to appear fairly gradually over a period of time, and the earlier you get a diagnosis, the simpler and more effective the treatment.

If your older dog is showing any of these symptoms, and especially if his bark sounds different (hoarse, lower pitched or just ‘rough’) too, he could have Laryngeal Paralysis.

If this cause of old dog coughing isn’t recognized and treated early, it can worsen until you have an emergency situation where your dog can’t breath.

Your veterinarian will use a few different tests to confirm a diagnosis and determine what’s causing the paralysis.

Depending on the results of those tests, and how severe your older dogs symptoms are, a treatment plan will be put in place.

There are several surgical options and which one is best for your dog can only be decided by a veterinarian.

But it’s up to you to make sure that you discuss all options with your vet so that you know what route he’s going to take and what the prognosis is.

Some breeds seem to be more inclined to develop Laryngeal Paralysis, and large/giant breeds are most at risk.

The three conditions above are the most common reason behind old dog coughing, but of course there are other conditions and diseases that cause a dog (of any age) to cough.

PawHealer has a range of natural herbal cough medicines formulated for dogs, and for different types of coughs.

Obviously, it’s vital to have your golden oldie checked out by your veterinarian to make sure that you know why he’s coughing and get any medication or treatment started first.

But, once you’ve got all that in place, one of these natural cough preparations may be just what you need to soothe an irritated trachea, help with the symptoms of kennel cough, and generally reduce coughing episodes.

About Dr. Winnie 80 Articles
My name is Dr. Winnie. I earned a Bachelor of Science in Psychology from Duke University, a Masters of Science in Biology from St Georges University, and graduated from the University of Pretoria Veterinary School in South Africa. I have been an animal lover and owners all my life having owned a Rottweiler named Duke, a Pekingese named Athena and now a Bull Mastiff named George, also known as big G! I'm also an amateur equestrian and love working with horses. I'm a full-time Veterinarian in South Africa specializing in internal medicine for large breed dogs. I enjoy spending time with my husband, 2 kids and Big G in my free time. Author and Contribturor at SeniorTailWaggers, A Love of Rottweilers, DogsCatsPets and TheDogsBone