Most often, diabetes in older dogs is identified as Diabetes Mellitus, and happens because your dog’s pancreas becomes unable to produce enough insulin to maintain healthy blood sugar levels. 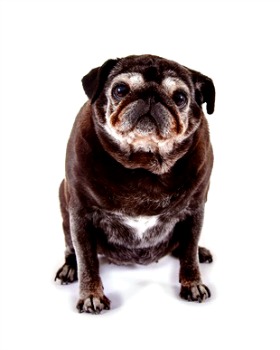 Dog diabetes is similar to human diabetes in some ways, and different in others.

If you want to make a comparison, you’ll find that canine diabetes is somewhat like Type I diabetes in humans.

Canine Diabetes Mellitus is usually not seen in younger dogs (those less than 4 or 5 years old), and symptoms most often become noticeable in dogs who are considered to be middle-aged or older.

It’s also more common in female dogs than in males, and unspayed females are more at risk than spayed females.

As with many diseases, some purebred dogs seem to have a predisposition to developing Diabetes during their lifetime.

Dog breeds who have an above-average chance of developing canine diabetes include (but may not be limited to):

Mixed breed dogs may be less likely to become diabetic, but they are not immune to developing the disease.

Canine Diabetes is not very common, but it is on the rise (as it is in humans).

Although there are no firm stats on the incidence of diabetes in dogs, estimates range from between 1 in 100 to 1 in 500 dogs being affected (at max that is 1% of all dogs).

However, studies show that over the past five years, there has been an increase of over 30% in the number of dogs being diagnosed with diabetes.

Perhaps surprisingly, there really isn’t one firm, universally accepted theory as to why some dogs become diabetic.

The physical cause of Diabetes Mellitus in dogs is an ineffective pancreas resulting in reduced insulin levels, or an incorrect physiological response by your dog’s body to normal insulin levels

Dog diabetes may be caused by:

Other possible causes of canine diabetes may include:

Symptoms of Diabetes in Dogs

Symptoms of canine diabetes are pretty diverse because high levels of blood sugar over time can cause damage to many organs and bodily functions.

The most common signs that your dog may be developing diabetes include:

Obviously some of these symptoms can point to other diseases or illnesses, so if you notice any of them in your dog it’s important to have a full veterinary exam so you can get a correct diagnosis.

How your vet chooses to treat your older dog if he develops diabetes depends on how advanced/severe his illness is at the time of diagnosis. 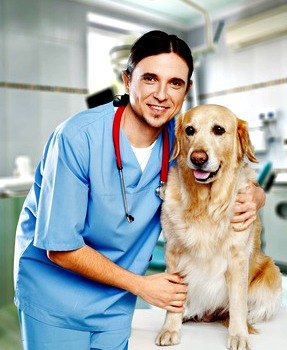 Your vet will most likely run tests on your dog’s blood and urine to check glucose levels.

Other lab work such as tests for liver function and enzymes, as well as electrolyte levels may also be used to figure out what stage your dog is at and how much damage has been done (or not done).

For early-to-mid stage canine diabetes some simple changes in diet and exercise levels may be the first step.

A dog food with a low glycemic index (which contains ingredients that convert to sugar slowly and therefore maintain a better glucose balance) can help.

So can consistent, moderate exercise which may help prevent erratic blood sugar spikes/drops.

If your dog is overweight, it’s a good idea for her/him to slim down under your vet’s supervision. This will make the body better able to maintain healthy glucose levels.

Some dogs with mild/moderate diabetic symptoms will also need daily insulin shots, for the rest of their lives.

Dogs whose diabetes has become severe may need specialized, in-house care in order to stabilize their health. Once ready to return home they will also be likely to need daily insulin therapy.

Giving your dog a daily shot might sound awful, but I’m told that it isn’t too difficult and quickly becomes just a part of your daily dog-care routine.

In some cases oral medications can be prescribed in place of the shots, the decision on which treatment option is best for any dog with diabetes rests with the veterinarian.

Treatment for canine diabetes also includes keeping a close eye on blood sugar levels, so you’ll be doing regular glucose testing (which can be done at home). Periodic blood tests will also be done by your veterinarian.

Your vet will be able to tell you how to monitor your golden oldie successfully, the signs that could mean trouble, and how to handle any issues.

Due to the effect hormones can have on glucose levels, your vet may suggest that an un-spayed female be spayed as soon as her health is stable as part of her treatment program.

Diabetes in dogs is a chronic condition, and requires on-going treatment and monitoring for life, as well as a regular exercise routine and regular mealtimes.

Luckily with the right care your diabetic dog’s life can continue to be happy, comfortable and enjoyable.

There is no way to guarantee that your dog won’t develop canine diabetes in later life.

Genetics can be an invisible trigger, and there are still some unknowns and uncertainties surrounding the disease

But the good news is that there are some simple things you can do that will help minimize the risks for your dog, these include:

Feeding a premium dog food, portion control, and regular mealtimes are all part of maintaining a healthy weight for your senior dog.

A low fat, high fiber diet is what you should be aiming for. Check out this page for more help with choosing the best food for dogs with health problems, including Diabetes.

Although a few treats aren’t going to pack on the pounds, it’s important to monitor how many treats and goodies your dog gets… and even more important to make sure that they are suitable for diabetic dogs.

Choosing diabetic dog treats isn’t a challenge when you know what your options are!

Have a regular exercise routine

Getting a moderate amount of exercise on a daily basis is good for dogs of all ages and can help prevent many canine health problems including diabetes.

Combined with an appropriate and healthy diet, exercise will also help to keep your dog at the correct weight.

Daily walks, back-yard play-times, even training sessions can all play a role in increasing your senior dogs activity level.

Check out this page to learn more about exercising older dogs safely and effectively.

Avoid long-term steroid use if possible

Research indicates that long-term use of steroid drugs can cause auto-immune problems or other side effects which may lead to the development of diabetes.

Some health conditions require the use of steroid medications, and in that situation obviously be guided by your veterinarian’s advice.

But, limit the length of time your dog has to use these as much as possible.